The 10 commandments of scientific journalism have become 25 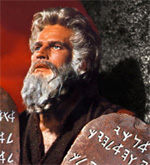 Last year Dave Mosher published  “The ten commandments of science journalism”on his blog Cosmopolitanaut (read more information). Four months later, the journalist Tim Radford has published in The Guardian his Manifesto for the simple scribe, which includes not 10 but 25 commandments for journalists.

A curious fact: the reader easily sees that both authors have used the same image to illustrate the commandments. However, Mosher had even written his rules down on the stone.

Tim Radford is an experienced journalist who has worked for The Guardian becomming letters editor, arts editor, literary editor and science editor among others. For four times he has won the Association of British Science Writers award for science writer of the year.

Radford has recently published on this newspaper his manifesto for the simple scribe. What fistly started as a personal exercise has become a very useful list of commandments, we could even say essential, for science journalists.

Due to his knowledge he has been asked to do some media trainings in companies such as Elsevier and Nature, where he explained the importance of the 25 clues for correct scientific periodism.