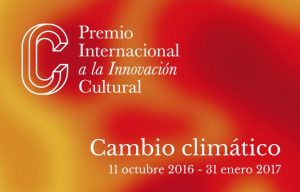 How can culture defy climate change? The second edition of the Cultural Innovation International Prize encourages projects that offer imaginative and effective solutions to one of the biggest global problems of the 21st century. The winning proposal will be included in an exhibition on the subject at the Centre de Cultura Contemporània de Barcelona (CCCB).

Is open to innovative cultural projects that raise awareness about climate change, empowering and involving society actively in the global commitment to environmental responsibility.

Is designed so that the winning proposal can be featured in the framework of the exhibition «After the End of the World»  in October 2017. If applicable, the project will be loaned space at Beta Station, a laboratory space adjoining the Centre’s galleries.

Includes prize money of 20,000 euros to develop the winning proposal.

Is open to projects in the framework of the third culture (proposals that explore links between art, science, humanities and technology), education (informative and educational formats that involve educators, children, young people and families) or citizen-led innovation (new tools, platforms and programmes for collective participation and the design of ideas for social transformation).

The CCCB centres its activity around creative research and the production of knowledge through a series of central projects produced in-house, such as thematic exhibitions, and other live events and digital formats: international debates, the CCCB Lab, the literature platform Kosmopolis, the Beta line of activities: projects that approach the culture of the 21st century in an integrated way along with the major transformations of the digital era; the Xcèntric experimental film festival, the European Prize for Urban Public Space, the Cultural Innovation International Prize, the CCCB Archive platform and other associated proposals and festivals.