Sharon Dunwoody and the Science of Science Communication

Our 2022 post for 11-F (11th of February), is dedicated to Sharon Dunwoody, who passed away this week, although she will undoubtedly remain alive for many years among the people who do “the science of science communication”. That is, those who study how the advances in science and technology are explained to the general public through mass media, social networks, documentaries, books and magazines, science museums, etc.

Sharon Dunwoody’s contributions to the study of Public Communication of Science and Technology (PCST) are significant, but, above all, we celebrate her today because she has been one of the first women researchers in this field who managed to stand out in an academic environment dominated by male figures and in which traditionally the gender gap has been huge. 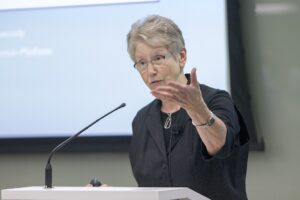 The role of women in PCST research is not much better than in other disciplines. Gender inequalities in our field have traditionally been as unfair and frustrating as in many others: men have held most of the positions of responsibility in academia and professional associations, their publications have been more cited and their names have been more prominent and more present as keyspeakers in congresses and debates about the public communication of science. The reasons for the inequality in PCST research have not yet been studied, but they probably are the same as those already identified in other fields: unconscious biases when evaluating a publication or curriculum, the professional environment of academia and its unwritten rules in which women have little relevance, added difficulties of the poor reconciliation between work and family life, etc.

The reduction of inequalities in the field of science has begun only a few years ago, and not precisely because of the mere passing of time, but because of an active and strategic effort to enhance the role of women. An effort to promote equity in which many people in the world have participated in (initially exclusively women) and to which small and large organizations have gradually joined. The 11-F, or International Day of Women and Girls in Science, is a clear example of a science communication initiative that aims to accelerate gender balance in research in an active way. In its first edition in 2016, the 11-F had little impact. It was limited to being an inconspicuous action about the communication of science with some activities (exhibitions, conferences, articles) in which visibility was given to scientists who, despite having contributed significantly to knowledge, had not managed to reach the eminence of their male peers. In the second edition, the number of actions and organizations adhering to this action was already much higher. And so on, until this year 2022, in which there are thousands of institutions around the world that today are talking about women in science, how to attract girls and adolescents to STEM (Science, Technology, Engineering and Mathematics), how to retain female talent in academia and how to reduce inequality in the research career so that it stops penalizing half of the population just for the fact of not having been born a man.

The last time I saw Sharon Dunwoody was during an international congress in 2018 in Dunedin. I had met her years ago, on several occasions. We had exchanged many emails for professional topics and we also followed each other at Researchgate, but that was it. That’s why, on those memorable days in New Zealand, I was grateful to be able to get to know her better at the hotel breakfasts or the congress lunches. We talked sometimes about the difficulty of understanding and explaining that science is full of uncertainties (we did not know then that two years later we would live through the Covid-19 pandemic and that communicating the uncertainty of science was going to be the main challenge for journalists). We also chatted about the responsibility of educating future generations of science communicators and her eternal smile widened even more when she started talking about her students. Her way of educating was not based on telling them what to do, but to help them reflect on how things were and how they could be improved.

I want to think that the new generations of women dedicated to science communication (and to the “science of science communication”) will not have as many difficulties as we or the women who preceded us had. With this intention, and because it is not simply a matter of letting time pass, in my classes and in everything I organize (courses, research projects, publications, congresses, debates and activities aimed at the general public) I try to give visibility to this issue, explain what science knows about the causes of gender inequalities and what actions or initiatives can be carried out to try to reduce them. I also try to explain that it is worth doing.

Author: Gema Revuelta, director of the Studies Center on Science, Communication and Society (Pompeu Fabra University, UPF) and of the Master’s Degree in Scientific, Medical and Environmental Communication at UPF-Barcelona School of Management. Vice President of the Spanish Association of Scientific Communication.