Peer review is not perfect 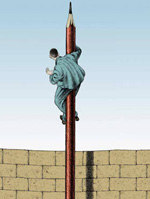 Often the exalted scientific and medical journals sitting atop the impact factor pyramid are considered the only publications that offer legitimate breakthroughs in basic and clinical research. But some of the most important findings have been published in considerably less prestigious titles. Take the paper describing BLAST—the software that revolutionized bioinformatics by making it easier to search for homologous sequences. This manuscript has, not surprisingly, accumulated nearly 30,000 citations since it was published in 1990. What may be surprising, however, was the fact that this paper was published in a journal with a current impact factor of 3.9.

Read the rest of this article in The Scientist