Science & You call for participation is open until September 15th. 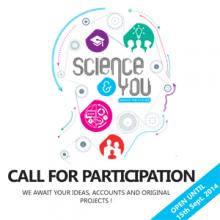 Science & You is an international cultural and scientific event open to anyone interested in science communication and organized by Université de Lorraine. It will take place in Nancy during June 1st to 6th 2015.

Science & You has opened the call for proposals for its Journées Hubert Curien (JHC) International Conference and its Science and Culture Forum for everyone interested in the theory or the practice of science communication. They are addressed to researchers, PhD students, mediators, business leaders and journalists.

All the proposals submitted must revolve around a single main theme: “Scientific culture on the move: forms of mobilization, cultural and political contexts, social links.”

To submit a proposal you must fill in the registration form until 15th September 2014. The projects will be selected by the Scientific Committee in which, among others, Vladimir de Semir -director of the Master in Scientific, Medical and Environmental Communication and founder of Scientific Communication Observatory – is a member.

The JHC International Conference will bring together 700 professionals in science communication in order to reflect on the future of the field. The Science and Culture Forum will allow research institutions, actors of science culture and businesses to present the most innovative forms of communication to the general public.